Lowercase e:  one pen-width below the waist-line, write a beak serif. Go back and fill in the space. Then the last stroke. Do the same beak serif when writing the “c”.

Alternate a, d, and o with the beak serif:

o :  should be symmetrical around the vertical axis. If you look at it upside down, it should look the same.

b, f, h, l :  start the vertical stroke with a tiny bit of curve at the ascender, to smooth the transition of the hairline.

The GOAL is to make the white spaces even.

Spacing Issues:  Highlight the white space in your writing to compare the volumes of the space between letters. You can always touch or overlap letters as needed to improve the spacing.

The word “freezing” is difficult because of the open spaces in e & z:
To  improve spacing, try this alternate “z” even if it isn’t historically accurate.

Increase letter spacing overall if you have an unavoidable gap, which often happens with a “z”. (prizes)

Exercise:  write your name in all lowercase letters with flourishing if you can. Try stacking your names for artistic effect. 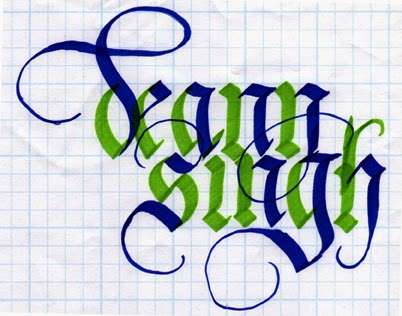 Then DeAnn demonstrated the capital Fraktur letters. Capitals are 7 pen-widths in height, so they go from the base to the ascender. Even though they aren’t much taller than the lowercase letters, their width makes them standout. The pen angle is slightly flatter, at 40-degrees, so that the downstrokes are thicker. Study the exemplar and the ductus or stroke sequence. Some of the letters have strokes that can be written in 2 strokes or 1 (noted below). 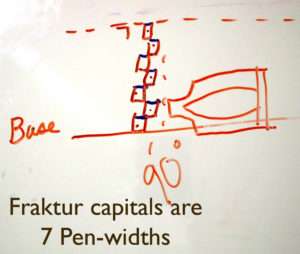 TIP:  never use these capitals together for a word in all-capitals!

A:  DeAnn realizes that this capital doesn’t look like a current capital “A”, but she says “be cool and accept that this is the Fraktur A”. Start with a big oval. You can write the 2nd stroke separately, or as a continuation of the first.

Serif on the A:  add an s-shaped serif on the first stroke at the end.

Alternate A :  For those who can’t stand the Fraktur A, an alternate letterform is provided (see end of exemplar). Note that the alternate stroke 3 is diagonal, not straight up and down like the classic form.

Other capitals with similar beginning strokes to A that you can add the s-serif to: B, M, N, R, V, W

B :  make stroke 2 long enough that it can meet stroke 3 smoothly.

M :  in your mind, think of stroke 3 as fractures that have been rounded. The crossbar (stroke 5) is a decoration to break-up some of the inner whitespace. Both sides should have similar volume. Similar remarks for the W.

V :  make stroke 2 long enough to connect with stroke 3; if the letter looks like it’s falling over, then stroke 2 isn’t long enough.

O :  for the O-family of letters (O, C, G, Q, S), think in terms of the O-shape. Start 1 pen-width below the ascender, go down, then over. Notice that stroke 1 does not curve outward very much.

D :  start stroke 3 at least at the margin where stroke 2 starts; can start a little sooner.

F :  downstroke has a slight s-shape, not a straight downstroke. Stroke 3 should not overlap stroke 1, instead the edges meet.

H :  don’t make stroke 3 too wavy; it shouldn’t look like a flag waving in the wind.

I :  end the downstroke 1 pen-width (at 40-degrees) above the baseline so that it can meet the second stroke.

J :  like an “I” but end the downstroke slightly below the baseline. The crossbar is about halfway.

K :  stroke 4 should start slightly below the waist and end beyond the end of stroke 3.

L :  you can make the body of the “L” in 2 separate strokes where you pick up the pen, as on the exemplar (note the wedge shape), or all in one stroke.

T :  stroke 1 starts at the ascender, then make a hairline of 1 pen-width, then stroke down. Stroke 3 has a slight curve going in and going out, but it fairly straight in between.

Alternate T :  stroke 1 is similar to the O-shape (see below). Don’t curve outward too much.

P :  stroke 2 and 3 are slightly above the baseline.

U :  make stroke 2 long enough to connect with stroke 3.

X :  an alternate stroke sequence is to continue stroke 1 beyond the baseline to form the descender stroke (stroke 2 on the exemplar). Then the strokes on the right branch off from the stem stroke.

Y :  the last letterform on the exemplar is a “Y” (not an “N”); this letterform appears in historical manuscripts.

Z:  DeAnn likes to make this more edgy by exaggerating the s-shapes. 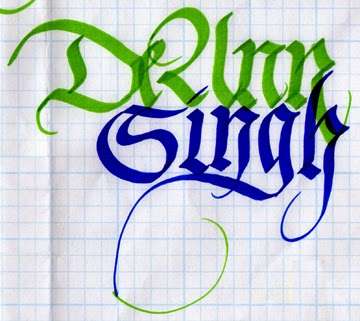 Exercise:  write your name with initial capitals followed by lowercase letters. Again try stacking your names. Try to come up with a logo of your initials. 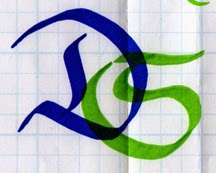 Turn your initals into a logo

HOMEWORK:  Practice lowercase and capital letters by writing alphabet words (e.g. Apple, Banana, Cherry…). Go to DeAnn’s website to get the alphabet flower names: (http://designingletters.com/html/flowernames.html)
Or Google “alphabetical list of” for other examples.

Practice writing your name and come up with your logo.

Then practice writing text, such as a poem, song lyrics, or sage words. Intermediates can go down to the next pen size of 3.8 mm.

Preview of Fraktur project:  using the 6.0 mm Parallel Pen, we’ll write the capitals decoratively on watercolor paper, then color in the white space with watercolors. DeAnn will demo this next week. 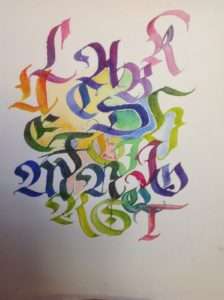