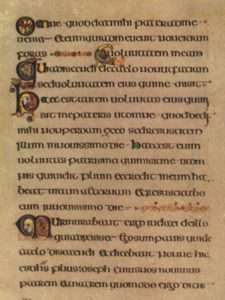 Uncial history:  Uncial was common in the 3rd to 8th centuries AD. The oldest remaining copy of the New Testament is written in Greek Uncial (~100 AD (CE)) on papyrus. Uncial is considered the first manuscript hand. It’s a majuscule hand, which means the letters are all capitals without any lowercase letters. Historically it is “stacked”, written without any ascender/descender space, and without breaks between words or punctuation. Uncial was used until the 9th century.

TIP:  If your nib becomes stuck in the pen holder (because it’s rusted or stuck from dried gum Arabic), try moving it side-to-side while holding it with your rag to loosen it. It it just won’t come out, fill a small container with very  hot water and dip the pen holder in there to dissolve any dried gum Arabic and loosen the plastic. Once you pull out the nib, leave it out.

Don’t store the nib in the pen holder if you’re not going to be using it for a while. It’s safer to store it separately. See how Satomi labels and stores her nibs: 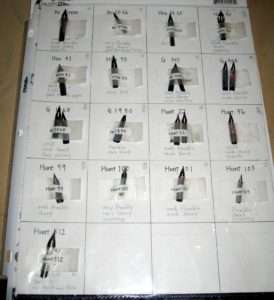 For example, QUICK:  because of the large counterspace (white space) of C and E, they can be very close to the next letter. U and I can’t be too close together, but I can be closer to C.

Two curved letters next to each other can overlap if the other letter spacing is close. 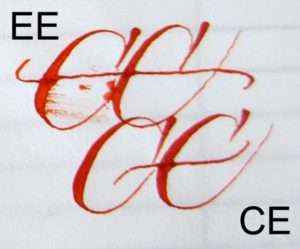 If the letter sequence, whether straight or curved, creates a large whitespace, such as ST, LY, IV, then decrease the space between them.

THE:  it’s OK to cross both the H and E in one stroke so that the ends of the cross-strokes don’t create a dark spot.

To check how your letter spacing is, close one eye and squint with the other. You should be able to see any “dark spots” – that’s where the letters are too close together.

Spacing between words:  Put just enough space between words so that you can see that it’s a new word. If words are spaced too far apart, a sentence will look like a list of words rather than a real sentence 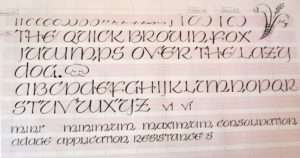